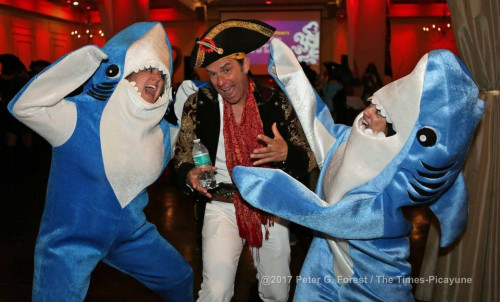 OHL's Pirate Ball 2017 was a great success! There was food, fun, dancing, great music, and a successful silent auction! A great time was had by all, but, most importantly, proceeds raised from the event goes directly back to OHL! THANK YOU to our sponsors: Baptist Community Ministries, Big Easy Construction, Canal Furniture, Cox Communications, Fidelity Bank, GNO Federal Credit Union, NAP Properties, New Orleans Musician's Clinic and Assistance Fund, Avita Pharmacy, Domain Properties, Gillis Ellis Baker, Bev and Ray Nichols, Lanay Stockstill, Postlewaite & Netterville, and The Rotary Club of the West Bank! We simply could not have done this event without your support! Check out a photo album from Pirate Ball here. Per The Times-Picayune's Sue Strachan, "Revelers got their sea legs in shape for the Odyssey House Louisiana Pirate Ball, June 17 at the Cannery. Pirate attire was de rigueur for partygoers, who enjoyed performances from Meschiya Lake and the Little Big Horns and the Sirens of New Orleans dance troupe. Andrew Ward was the event emcee. The Thomy Lafon Award was presented to Mary McCullough, in recognition of her contributions to the organization's mission and social services in New Orleans. The award was named in honor of Lafon, a prominent Creole businessman and philanthropist from the 19th century; Odyssey House's offices are located in a building he owned. Proceeds from the ball benefit Odyssey House's addiction treatment and healthcare services."