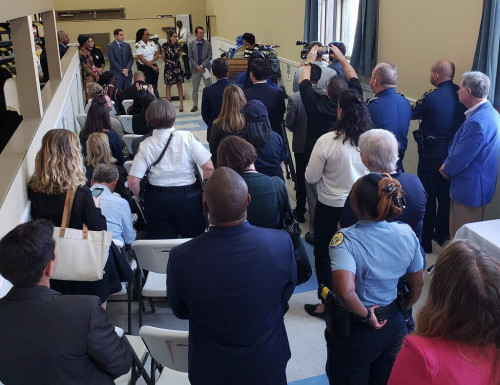 Another week, another ribbon cutting! This time we were thrilled to celebrate the ribbon cutting for our Sobering Center, a 25-bed facility to receive individuals identified as publicly intoxicated by NOPD, State Police, other law enforcement agents based within Orleans Parish, and/or New Orleans EMS. Intoxicated individuals would stay at the facility while they sober up, under the care of trained staff. The Sobering Center will welcome and care for anyone so deemed publicly intoxicated, including “chronic inebriates,” i.e. people with substance use disorders who live on the streets, as well as visitors to New Orleans who have over-imbibed. The ceremony was well-attended and had representation from all of our major partners: the Mayor's Office, NOPD, NOEMS and the Department of Health. OHL CEO Ed Carlson also did the media rounds to announce the Sobering Center opening, appearing on Fox8's morning show and giving an interview with WBOK. The ribbon cutting was also attended by every major news outlet, so we are exited to receive that good press for OHL