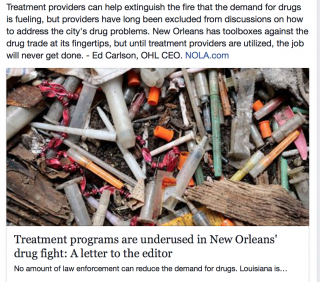 The Times-Picayune recently printed an article regarding the increase in violent crime in New Orleans (see article here).

OHL CEO Edward Carlson wrote a Letter to the Editor regarding this article that was published on nola.com on March 27, 2017. Read what OHL has to say below.

Re: "Violent crime in New Orleans up nearly 14 percent last year compared to 2015." NOPD Deputy Chief Paul Noel and former police superintendent Ronal Serpas make excellent points that all too often law enforcement is seen as the "total solution" to crime, that NOPD has limited tools in its belt and that society does expect police to do something about the supply of drugs.

However, what continues to be left out of the equation in New Orleans is the demand side of drugs. There is no amount of law enforcement that can reduce the demand for drugs. Louisiana is one of eight states that has more opioid prescriptions than it has residents. The opioid epidemic is not slowing down and neither will the associated violent crime until both the supply and demand sides of the drug trade are properly addressed.